Fortis and Aryans organized a Webinar on “Mental Health for All”

Anchal while interacting with the students said that the world is experiencing the unprecedented impact of the current global health emergency due to COVID-19 that has also impacted on the mental health of millions of people. The mental health trauma includes depression, Anger, personality disorders, Panic attacks, Phobias, psychosis, stress, suicidal feelings etc.

Anchal explained that close to one billion people globally have a mental disorder and those with severe mental disorders tended to die 10-20 years earlier than the general population. Suicide is claiming the lives of close to 8 lacs people every year. More than 75% of people with mental, neurological and substance use disorders receive no treatment for their condition at all.

Anchal told that to protect and to aware people about mental health 10th October is observed as World Mental Health Day. It is a day for global mental health education, awareness and advocacy against social stigma. Small things like exercising, eating a balanced and healthy meals, opening up to other people in your life, taking a break when you need to, remembering something you are grateful for and getting a good night’s sleep, can be helpful in boosting your mental health, she advised.

Vyas while interacting with students said globally herbal medicine has been considered an important alternative to modern allopathic medicine. Phytopharmaceuticals are herbal medicines whose efficacy is down to one or several plant substances or active ingredients. They have been used for treating diseases since time immemorial, he added.

He further said that Plants produce an incredible variety of natural compounds. It is therefore not surprising that humans make use of this huge diversity. Historical sources show that the use of medicinal plants goes way back to the Bronze Age.

Vyas enlightened students that naturally existing compounds provide a wealth of chemical diversity, including antiviral activity, and thus may have utility as therapeutic agents against corona virus infections. There are promising compounds for the inhibition of coronavirus in humans include scutellarein, silvestrol, tryptanthrin, saikosaponin B2, quercetin, myricetin, caffeic acid, psoralidin, isobavachalcone etc, he explained.

Dr. Chugh while interacting with students said that No doubt, online education is helping students to catch up the losted classes due to prolonged lockdown because of COVID-19 pandemic. Attending classes online without break is causing problems like dry eye syndrome & burning eye sensation. The deep dependence on technology has forced many jobs to move online, is taking a toll on everyone eyes, he added

Dr Chugh advised that at least one of the online sessions should be a physical activity like yoga, dance etc. The students should follow the 20-20-20 rule. They should blink in between, take a 20 second-long break after every 20 minutes of screen time, and look at something located 20 feet away, he said.

Chugh said that viewing a computer screen, laptop or mobile will not cause any harm to vision if all safety measures are implemented. He stressed on the importance of good posture & screen should be placed on a table at a distance of 1 foot. The viewing screen should be kept 20 degrees below the eye level no bright light should fall on the screen as this can cause glare.

Mrs. Salaria while interacting with students said that Fear always stems from two things—one, something unpleasant that you are aware of and are scared to experience again, and two, a new thing that is beyond your comprehension. It makes us anxious and gives us the fear of the unknown. Most of us feel a degree of fear & nervous apprehension when preparing to speak up or perform in front of a group. They are suffering from a form of social anxiety disorder, she said.

Salaria further explained that Learning to accept yourself and not feeling that you have to prove yourself to others is at the root of healing.  To overcome fear some people also choose medication or natural remedies to help reduce their symptoms of performance anxiety.

Salaria mentioned that if you are willing stop avoiding your fears and learn new skills to reduce and manage them, you will develop an empowering belief and trust in yourself. In facing your fear, it becomes possible to overcome performance anxiety and find comfort and ease in expressing yourself in front of others, she added.

Sh. Anil Sahasrabudhe Chairman, AICTE, while addressing said that the New Education Policy will change the education system of the entire country. The policy has all the ingredients to address the issues which have affected technical education in the country and overcome the crisis, he added. While the industry is looking for quality and competent manpower, the system has been churning out lakhs of graduates who are not fit to be employed. This policy has laid down the foundations of futuristic education in India solving employment problems also.

Dr. M. P. Poonia, Vice Chairman, AICTE while interacting said that after 34 years, the Modi Government has taken a big initiative by introducing New Education Policy. But this policy has come up with a lot of opportunities & challenges. On one hand more than 10000 technical colleges across the country have the option to offer multidisciplinary courses but at the same time institutes with quality education would survive.

Poonia further added that the graded autonomy will be given to institutions on the basis of performance of the institute which will be very supportive for the colleges. Colleges have to upgrade themselves with the latest technology so that they can compete with the world’s best colleges, he urged.

Professor Rajive Kumar, Member Secretary, AICTE said that the policy envisages broad based, multi-disciplinary, holistic undergraduate education with flexible curriculum, creative combinations of subjects, integration of vocational education and multiple entry and exit points with appropriate certification. The focus will be on testing concepts and knowledge application, he added.

Joint Association of Colleges (JAC) comprising around 1650 colleges of Punjab has given an ultimatum to the Punjab Government to clarify the status of SC Scholarship within 15 days after the Final investigation.

It is to be mentioned that, the JAC is representing 13 different associations of Punjab.

S. Jagjit Singh, Chairman, JAC said that the Govt has made the policy of holding the scholarship funds and issuing the statements of scholarship scams of SC Students followed by repeated audits and investigations since 2017.  Jagjit Singh added that during its tenure, the government hasn’t adopted any harmony policy to monitor the scholarship scheme to save the education of SC students. “Creating the confusion among the students and colleges of the scams the Government doesn’t want to release the scholarship funds of the SC students which will not be tolerated further at any cost” added Jagjit.

Dr. Gurmeet Singh Dhaliwal, Chairman, JAC said various departments of the Govt including Finance Dept, Social Welfare Dept etc have conducted many Audits in past years for the release of scholarship funds the records of which are available with the Govt but still the if the Govt needs more records then Govt should complete the process in next 15 days and release the scholarship amount of Rs 1850 crore which is pending since last 3 years.

S. S Chattha, General Secretary, JAC said that it was the responsibility of the Central Government to release 100% of the money for this scholarship scheme till the session 2016-17, but for the session 2017-18, 2018-19, 2019-20 neither the Central Government nor the Punjab Government is taking responsibility of the scholarship of the pass out students. The Government has not clarified any policy for the session 2020-21, due to which the future of the Lakhs of SC students and educational institutions is at stake. This confusion and evasive policy of the government has broken the education structure of Punjab financially due to which lakhs of SC students are being denied higher education and bank accounts of many educational institutions have turned to NPA.

Dr. Thakur while interacting with students explained why stress happens and how to manage it? Stress can be a motivator and it can even be essential to survival & to complete a target on time. The body’s fight mechanism against various stressors tells a person when and how to respond to danger, she added.

Dr. Thakur said that the COVID-19 has disrupted every aspect of our lives. Anxiety and depression have significantly heightened stress during times this pandemic. While lockdown has been difficult for everyone, the young generation is finding it mentally tedious. She highlighted that 17 per cent of them are experiencing these symptoms due to the ongoing impact of Corona.

Dr. Thakur further said that, in the age group of the 25-30, youth are experiencing symptoms due to job loss, financial problems & less salary. Factors like extended work hours, work from home with various other responsibilities to deal with are adding to serious mental health problems.

The Divisional Commissioner while addressing said that our teachers are the true pillars of our success. They nourish and prepare students for their future as they are the real icon of knowledge and wisdom. He explained the transformative role of a teacher in a student’s life.

Dr Kataria while interacting said that a teacher is a friend, philosopher, and a guide, who instills confidence in young minds, gives them direction and encourages them to dream. Teachers spend all their years in educating us and helping us become better human beings, he added.

It is to mention that, Rotary Club Rajpura was established in 1966 & from more than 55 years working for noble cause for society. 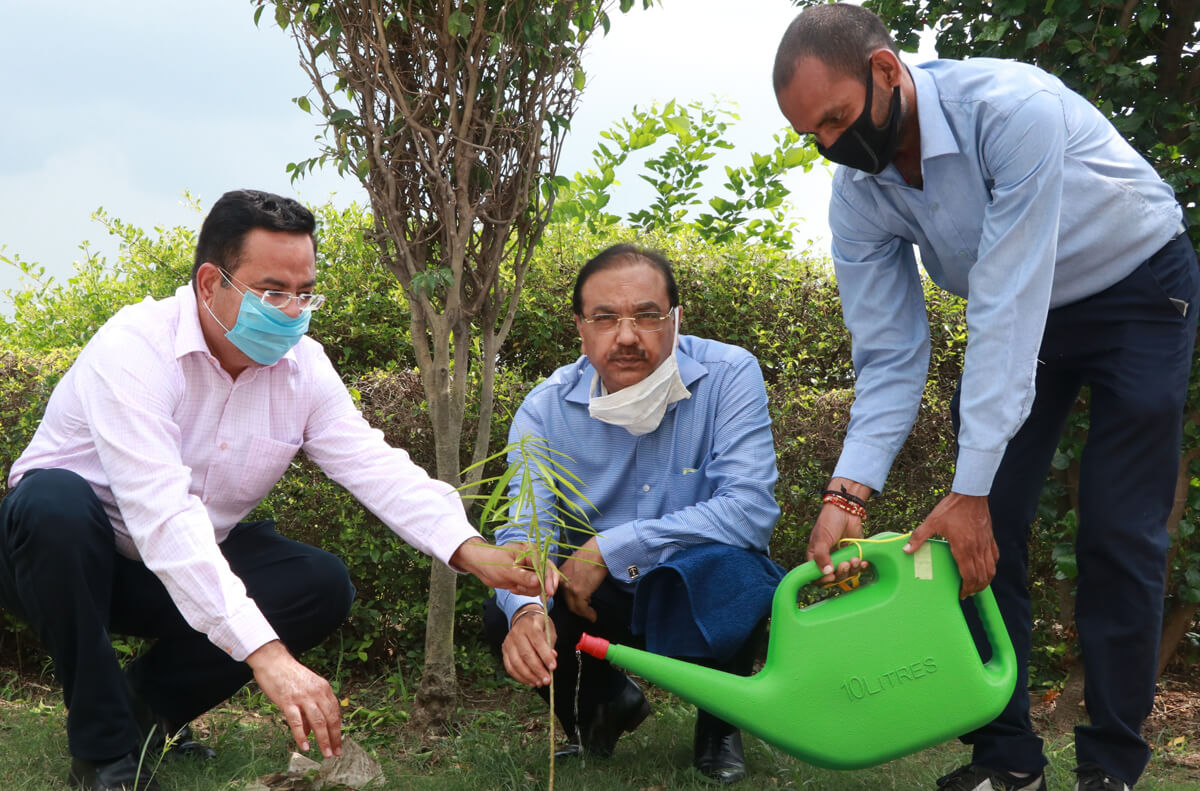 Sh. Chander Gaind said that we have hundreds of private and govt. schools and colleges in the district and we have a lot of surplus land which is not being used for playgrounds and buildings. He inspired each and every college with the help of forest department to use that land for Tree Plantation.

Dr. Anshu Kataria while speaking on the occasion said that trees not only bestow us with shade and fruits but also make campus beautiful. He also mentioned about the existing environmental problems that we are facing today due to deforestation. He appealed all to actively participate in tree plantation drives make Punjab clean, green and pollution-free.