To encourage youth of Jammu & Kashmir, Aryans Group of Colleges, Rajpura, Near Chandigarh has decided to give away Innovative Idea Awards during event “Empowering Youth: Empowering JK” on 23rd & 24th October. During this event, the selected students with best idea will be honored & awarded with 100% scholarship to study in Aryans Group for pursuing higher education.

Dr Kataria said that the objective of this webinar is to encourage the students for more and more innovations in and outside the Valley for the betterment of the country. Aryans Group feels proud of their JK students as they will carry forward the legacy of their seniors in the field of innovations and due to these reasons Aryans has emerged as a popular destination for the JK students. Over 2000 JK students from various parts of Kashmir are studying in Aryans in various courses including B.Tech, Leet, LL.B, BA-LLB, MBA, BBA, BCA, B.Com, B.Sc (Agri), B. Sc. Nursing, GNM, ANM, Paramedical, B.Ed, MA(Edu), B. Pharmacy, D. Pharmacy, Polytechnic Diploma etc, he added.

It is to be mentioned that earlier to this, five major innovations done by Aryans students namely “Aryans Solar Boat” that can can run upto 2 hours continuously & can be recharged simultaneously through solar energy, “Aryans Android App” in lieu to make campuses paper free, “Aryans Save Kashmir App” which was developed for the rescue operation at the time of floods in Kashmir, “Aryans Life Saving Glove” developed to provide timely assistance to the people prone to the risk of cardiac disease, “Aryans Safety Helmet” to provide timely first aid facility in case disaster happens at construction/ mining/ industrial sites, “eMunshi- Advocate Diary” Android App which will buzz an alarm and remind the lawyers about the important Court Date and cases etc were launched and applauded at various Government Levels and gained interest of many people, “Aryans Shikara App” to book online Shikara at Dal Lake, “Aryans Ramadan App” to set the alarm for Sehar time and Iftar time.

“Oral Dental Care during COVID-19”, a webinar held at Aryans 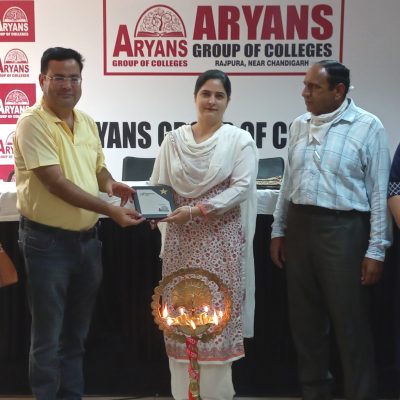 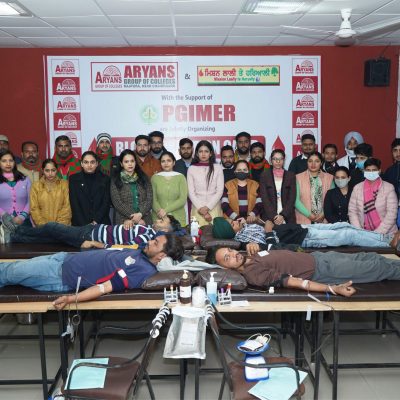